The first single I ever bought was Ghost Town by The Specials. It came to mind this morning as I was writing my Morning Pages, sparked by having read an article by Donna McLean yesterday.

Donna was a year below me at Prestwick Academy, so it really surprised me just how much she remembers about the punk scene in Prestwick in the 1970s, because I don't remember anything at all. I mean, I was there when punk was happening. How come I don't remember it?

My memory is a little vague of what I was thinking at the age of 9, but the memory of that first 45 single in my head is that I collected empty crisp packets from the playground of Kingcase Primary School in Prestwick to get enough tokens to send away for a top-10 single. Wotsit packets? Maybe. I can't really remember. Did you even get Wotsits in 1981? I do remember Burton's Potato Puffs being a playtime staple, but I don't think it was those packets. Anyway, this isn't about crisps.

I don't think I would have known the single or any of the other top 10 singles in the charts, with the possible exception of Memory by Elaine Paige, as my dad was a fan.

Donna's article was all about her mum's kitchen. That's where it all went down. The way she described the door opening to let out the smell of hair chemicals and fag smoke was so evocative.

Our wee kitchen was like a chemical factory, the back door always open to let the fumes and cigarette smoke out. I would hover by the door, listening in to the conversations. My mum was an agony aunt as well as a stylist, and there were plentiful mugs of sweet, milky tea.

My dad would've been listening to Radio Scotland, people talking about the news and current affairs. No music. But also with milky sweet tea.

I'm pretty sure I would've gathered the crisp-packet tokens and ordered whatever the #1 single was on the day I got enough tokens. I'm lucky that it was a single I can proudly say was my first, but the truth is it could have been Elaine Paige if she'd just sold more singles that week!

My dad did listen to music, but not often. All I remember him listening to was Abba and the Beatles. He did have Adam & the Ants - Kings of the Wild Frontier on tape, but I don't remember him ever listening to it. I'm pretty sure my cousin Louise would've brought that back from Saudi when she was working there, where tapes were cheap, along with Abba's Arrival and Super Trouper.

It would have been in 1982 when some more family came to visit, my mum's brother Ian, my aunt Joanette and their kids Sandra and Carole. I distinctly remember Sandra telling me about the top 40 on Radio 1 on a Sunday night. I'd never listened before and that's when I would have first tuned in. The song that reminds me of that time is Party Fears Two, by the Associates. I often think of that song as marking my musical awakening, although the timing might be a little off and I could be misremembering the timeline.

Then there was the time I found a fiver on Prestwick main street. I was with my dad and he made me take it to the police station to hand it in, only it was closed! Bonus. My reward at having 'done the right thing' was to be allowed to spend it in Woolworths on a tape. I chose Adam Ant's Prince Charming. That began a bit of an obsession, with posters of Adam on my wall from Look-in magazine—along with Kim Wilde, cos, well, it wasn't just my love of music that was awakening!

My bestie at school was also an Adam Ant fan and I remember borrowing his Friend or Foe record around Christmas 1982. It shows up in the background of an old Christmas photo from that year.

So I missed all of Adam Ant's early punk records. I was probably aware of the Sex Pistols in the background of the late 70s—how could you not be—but, knowing my dad's politics and tastes, I'm pretty sure he would've disapproved, so it wasn't part of my 1970s.

That's why it was so fascinating to read Donna's story of the same town at the same time. She was watching her mum bleaching hair in the kitchen while I was going for my high score on Astro Wars or watching Dallas.

And, of course, it makes me wonder how my kids will talk about music when they're older. I like to tell people that Freya's first words were Yellow Submarine. We had a playlist in the car when I took her to and from the forest crèche in Esch-sur-Alzette, Luxembourg. I asked her to tell mummy what we were singing to on the way home, to which she replied 'reen.' So, there you go - clearly Yellow Submarine!

And you'll imagine my pleasant surprise when she recently asked me if I knew of They Might be Giants and Frank Zappa. She hangs out in good company!

My son is quite different and, so far, at age 16, listens to no music whatsoever and requests that I turn it off when he comes into the kitchen. No, his early memories will be of computer games. As indeed are mine, but that's another story.

I missed punk because I was just a little too young and hadn’t had my musical awakening; and because my dad either disapproved or was indifferent. Either way, there was no punk in our house.

I suppose that Ghost Town single would have seemed quite controversial to my dad too - a political protest single in the house? Bought with crisp packets? And it was all mine. I was waking up!

Thanks to Anthony Pica and Judith Klinger for their thoughtful suggestions on this article, and to Foster for providing the platform. And, of course, to Donna, for the inspiration!

Introducing my Morning Pages newsletter. Join me in what I've found to be the most effective habit for improving my mental health.
Jun 2, 2022
2 min read
Apr
12

What Do 6000 Days Without Alcohol Feel Like for an Alcoholic?

I Am Not Broken 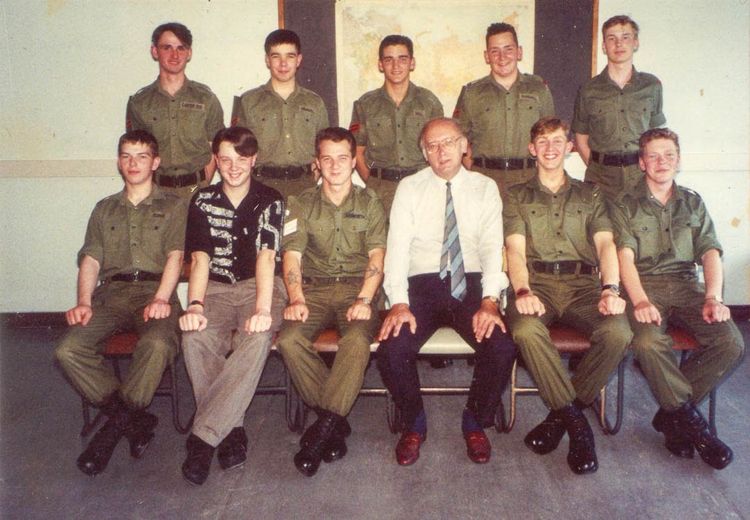 Thank You to my Russian Teacher

David Wolstencroft was my Russian teacher at the Army Apprentices College in Harrogate. He unlocked something in me that changed me in so many ways. This is my thank you letter to him.
Jan 4, 2022
8 min read